Bees made hives in hollow trees naturally. Early beekeepers would harvest this honey from the trees. Eventually they marked and claimed ownership of the trees and the hives contained therein. Beekeepers also started making their own cavities in hives. These types of hives were most common in the Northern Forest Zone of northeast Europe, which includes , , as well as Northern Czechoslovakia and . Larger logs were not usually available west of the deciduous forest zone.  There is no record of tree beekeeping found in the Scandinavian countries. It was probably too cold for hives to survive in the winter. (Crane 1999, 135)

Records of tree beekeeping exist from the 1200’s and 1300’s.  The Teutonic Order of Germany secured hereditary rights of bee trees in the 1253. Landowners started limiting the rights of tree beekeepers in the 1300’s. This included making new cavities in trees.
Log hives were developed and hung in the trees to keep animals from foraging in them. Until 1600, forests were used for hunting and collecting honey and wax. The Thirty Years War of Germany (1618-1648) changed all that. Trees were felled and hives moved closer to the home and placed in collections called apiaries. The switch from tree cavity to log hive beekeeping was caused by a shortage of natural cavities. Trees were felled on land used for agriculture or other purposes. Landowners also prohibited new cavities from being made.

Log hives were often carved with faces and then later whole logs were carved into human form. (Crane 1999, 231) In 1568, Nikel Jacob advises to use poplar, lime, alder, and willow, but not oak wood for making the hives. In the Armbruster Collection of Germany, there are hives made from poplar, lime, oak, alder, beech, sycamore, pine, and spruce or fir. (Crane 1999 p 229) Nikel Jacob describes the hives as being 165 centimeters high by 60 centimeters in diameter. In the , examples are one-hundred fifty to two hundred centimeters high by sixty centimeters in diameter. 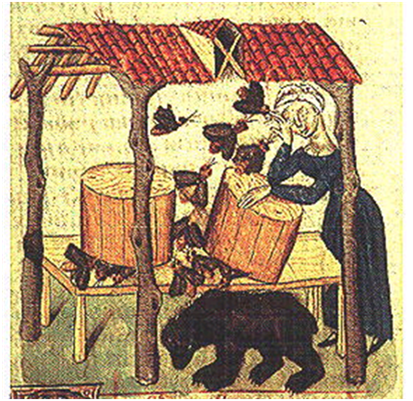 Large logs might be divided into two colonies. The hives were hung from trees or kept on platforms to prevent pest infestation. Most had doors or access holes (Crane 1999, 229) Honey comb was removed from the bottom of a closed top log hive. The beekeeper would take all the honey early in the season or leave enough combs later in the season for winter.
Email ThisBlogThis!Share to TwitterShare to FacebookShare to Pinterest
Labels: Apiary, Bee, Bees, Hive, Log, Medieval, Medieval Bee Facts, Medieval Bee Hives, Medieval Pics, North Eastern Europe, Pics, Series, Wood