A skep is an inverted basket made of wicker or coiled straw used in beekeeping for housing bees. The skep is over two thousand years old and straw hives are still used today in parts of Europe today.

There are many examples of skeps in period illustrations and woodcuts. The word skep is derived from the word skeppa. It is Norse for a container and measurement for grain. It was not until the sixteenth century that this term was used with regards to beekeeping. Before that, the word “hive” was used.

The earliest known remains of a wicker skep were from 1-200AD. The example came from a peat bog near Wilhelmshaven on the North Sea coast of Lower Saxony. Wicker and coiled straw basket techniques were known since Antiquity and could have been used as skeps then. 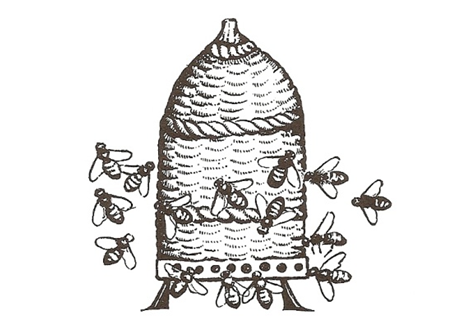 Wicker skeps, also referred to as an alveary, were woven on a whorl of thin branches of a spruce or fir tree. Dictionary.com defines a whorl as “a circular arrangement of like parts, such as leaves or flowers around a point on an axis.” The branches formed the main stakes. Other stakes were added for support as the diameter increased. Wicker skep size and shape is determined by the size and shape of the whorl used.