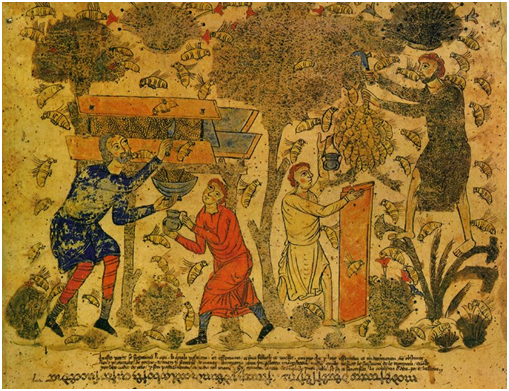 Another period style of a wood hive is also Italian. Hive management and harvest are much clearer in these examples than other styles of wood hives. Harvesting and swarm catching can be seen in the picture above. It appears that harvesting is done from along the length of the hive. The swarm is being caught on the short side indicating an entrance on that end. Two hives can be seen behind the hive being harvested. This shows how hives are placed. 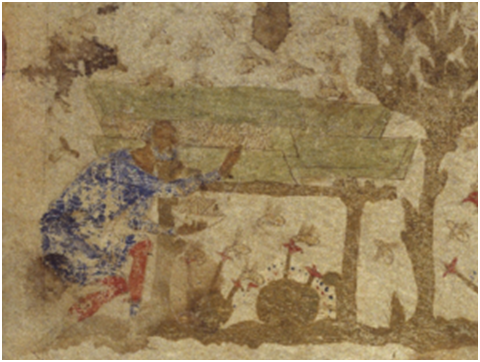 It is unclear in these images if there are hinges on either hive or if the panels are pinned in place. The hive must be closed up after inspection or harvest. The bees will only build in tight and dark spaces. The image directly above looks to be a beekeeper pulling a panel off. It also appears as though there is another hive stacked on top. This interpretation would necessitate the side panel opening. This would be possible if there were a space to slide a knife inside to separate the combs from the side panel. This could possibly do considerable damage to the combs though.
Email ThisBlogThis!Share to TwitterShare to FacebookShare to Pinterest
Labels: Bees, Box Hive, Italian, Italy, Medieval, Medieval Bee Facts, Medieval Bee Hives, Medieval Pics, Pics, Series, Wood